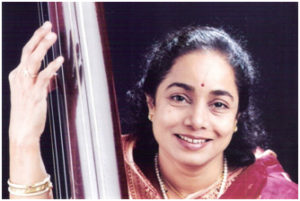 Prof. Shruti Sadolikar-Katkar was born into a family of musical tradition on 9th November, 1951, in Kurundwad, Kolhapur. She is a scholar, performer and teacher par excellence of the Jaipur-Atrauli gharana of khayal vocalism.

Lineage/Gurus:
She was initiated into raag-sangeet by her father, Wamanrao Sadolikar (who himself was a disciple of the legendary Alladiya Khan and his son, Bhurji Khan). He remained her primary guru till his death. She also received taleem from Gulubhai Jasdanwalla, another disciple of Alladiya Khan and his son, Manjhi Khan, from 1968 till 1990. From him she received many rare ragas and bandishes. She also imbibed a few old thumris from him. She then went on to seek further guidance and knowledge from Azizuddin Khan (son of Bhurji Khan, and grandson of Alladiya Khan) and continued to do so till his death in 2011.

Style:
Shruti Sadolikar-Katkar is one of few exponents of pure Jaipur gayaki, having trained under eminent gurus of the gharana. She is considered as an authority over the ragas and bandishes of this style of music owing to her rigorous training and her extensive reading and scholastic approach towards music. Besides khayal, she is also well-versed in other forms of vocalism, viz. Thumri, Tappa, Natya Sangeet, Bhajan, etc.

She has also done extensive reading and research on Haveli Sangeet, and sings them in their authentic form.

Awards/Achievements:
Shruti Sadolikar-Katkar has been conferred with many awards for her invaluable contribution to Indian music. Some of which are as below: