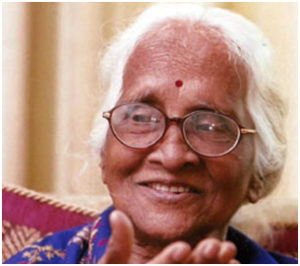 Padmavati Shaligram-Gokhale, born in Kolhapur, Maharashtra, was one of the foremost exponents and gurus of the Jaipur-Atrauli gharana.

Musical training and Gurus:
She started learning music at a very young age from her father and mainly from her uncle, Govindrao Shaligram, both of whom were direct disciples of the musical titan Alladiya Khan.

Style:
With rigorous riyaz she had cultivated a strong and yet, a very melodious voice. Her gayaki had the traditional elements of the Jaipur-Atrauli gharana with the swar–lagav was influenced by the Kirana gharana. She was known for her dazzling and brilliant cascading taans and she could create unending patterns with her taans.

Apart from raag-sangeet, she also sang Thumri and other allied genres of semi-classical music and her voice production technique was influenced by that of Begum Akhtar’s.

As a Guru:
Padmavatitai was a generous teacher and trained numerous disciples. Some of them are Kedar Naphade, Shubhada Paradkar, Sunita Tikare, Anita Sundararajan, Geeta Javdekar, and others.

Awards/achievements:
For her contribution to the field of Hindustani raag-sangeet she was bestowed with numerous honours.