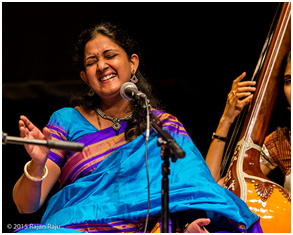 Early life:
Manjiri Asnare-Kelkar was born into a family of music lovers in 1971, in Sangli – a small town in Western Maharashtra. Her father, Shri Anand Asnare, a well known tabla player and a recognized artist of AIR, initiated Manjiri into Indian Classical Music. She was also well-trained in Kathak alongside vocal music and had won awards for her excellence in the dance form in her early days. Despite being proficient in both music and dance, she found her true calling in music.

Lineage/Gurus:
Initially, she received lessons from Chintubuwa Mhaiskar of the Gwalior gharana, who was one of the finest gurus based in Sangli. Later, she went on to seek taleem from Madhusudan Kanetkar, a doyen of the Jaipur-Atrauli gharana and a disciple of Bhurji Khan. She has also been one of the disciples of the Kishori Amonkar. Manjiri continues to receive invaluable guidance from Padma Talwalkar.