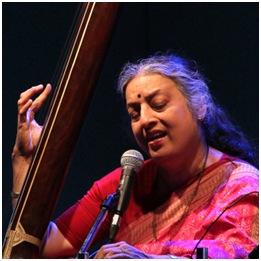 Early life:
Ashwini Bhide-Deshpande was born in Mumbai on 7th October, 1960, into a family of music connoisseurs and musicians. She completed her Sangeet Visharad from the Akhil Bharatiya Gandharva Mahavidyalaya. Being a scholar, Ashwinitai also obtained a PhD in Biochemistry from the reputed Bhabha Atomic Research Centre, Mumbai.

Lineage/Gurus:
Ashwinitai‘s journey into classical music began under the tutelage of Narayanrao Datar, who belonged to the Paluskar branch of the Gwalior gharana. Later, her disciplined taleem under her mother, Manik Bhide (who herself was trained under the legendary Kishori Amonkar) was largely made up of learning the traditional aspects of the Jaipur-Atrauli style of raga development and also studying the nuances of raga-music. She then went on to train under Ratnakar Pai, a renowned teacher of the gharana, from whom she received further guidance and a great repertoire of the traditional paramparik compositions and ragas.

As a Guru:
Ashwinitai is a dedicated teacher imparting taleem to the next generation. Some of her disciples include Saniya Patankar, Ravati Kamat, Apoorva Gokhale, Dhanashree Ghaisas, Saili Oak-Kalyanpur, Maitreyee Roy-Dadarkar, Nishad Matange, Vrushali Deshmukh, Swarangi Marathe, among many others.