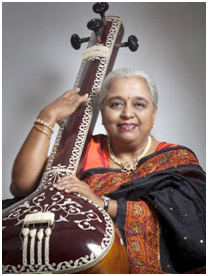 Dr. Alka Deo Marulkar (born 4th December, 1951) is a versatile vocalist, and a thinking musician. She has been awarded the Sangeetacharya degree – Doctorate in Music. She has had many accolades to her credit for her outstanding work, both in the field of musicology and her performing career.

Lineage/Gurus:
Alkatai‘s tutelage in music began at the tender age of 4, under her father, the veteran Rajabhau alias Dhundiraj Deo of the Gwalior, Kirana and Jaipur gharanas. Her training with her father continued for more than 35 years which enabled her to visualize a raga with various perspectives. She further went on to seek taleem from Madhusudan Kanetkar, another stalwart of the gharana, which continued for almost 10 years.

Style:
Her gayaki consists of solidity of Gwalior, romanticism of Kirana and intellectuality of Jaipur gharanas, with an added flavour of subtle rhythmic approach, towards her presentation. Her command over semi-classical forms like Thumri, Dadra, Kajri, Chaiti, and Hori in the Banaras style shows her versatility.